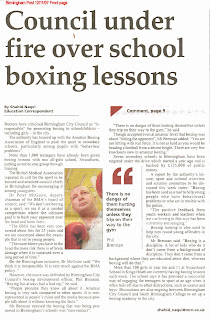 Boxing reached the front page this week when the 'Birmingham Post' ran a story on boxing in schools. The article was pretty good to be honest unfortunately the journalist did the usual 'lazy journo' thing of going for a dramatic headline, and printing the view of the BMA first in the article to grab attention. The article is misleading as well, I am sure the BMA were contacted by the paper and asked their opinion, as they have never contacted the Birmingham City Council off their own bat and complained. Anyway, boxing moves on in the city, and we continue to do our bit in trying to give the kids something to do that will help them to become as good as they can be.

The good thing is several people in the city came to the sports defence, including our own Frank O'Sullivan and the former Chairman of the citys' Education Committee.

The bad thing is I think Frank is leaving his chin a bit exposed !!!

The most important sound in a boxers life. The sound of the bell Sometimes the bell will come too soon, sometimes it feels like its never coming !!

Welcome to our page

Hello and welcome to our Blogger page. This page has beeen set up in order to display any information and news that is relevant to any of the Amateur Boxing Clubs in the ABAE Birmingham Division. We will supply contact details, news of upcoming events and hopefully lists of all the Birmingham boxers and there weights, ready for match making next season. Enjoy the page and feel free to contact me if you have any enquiries. Remember, boxing is the sport of champions!!
All the best
Phil Brennan
Birmingham Boxing Development Officer
Tel; 0121-464-6013
e-mail: philip.brennan@birmingham.gov.uk 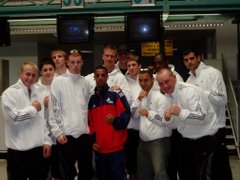 Going for a training week in Cyprus. The best boxers in Birmingham are set to leave Cyprus after a great week training with their national side. The lads were a credit to their clubs and to the city. Well done boys!! Phil Brennan. Birminghams Boxing Development Officer is employed jointly by both Birmingham City Council and the ABA of England. 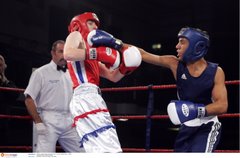 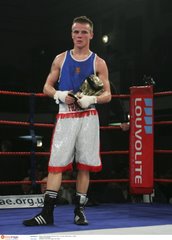 Phil B
Birmingham, West Midlands, United Kingdom
I am the newly appointed Birmingham Boxing Development Officer. My post is joint funded through the ABAE and Birmingham City Council. I have been involved in boxing for a long time and run my own gym here in Birmingham. This position will last for three years and began in June 2006. I am 36 years old. If you wish to contact me then please do so on 0121-464-6013 or e-mail on philip.brennan@birmingham.gov.uk